ELIOT PORTER
There Is My Own Spirit 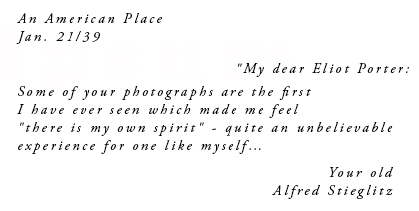 Scheinbaum & Russek present a rare selection of Eliot Porter’s vintage and modern prints. The exhibition traces his early work in black and white and color, some of which were shown in his 1939 exhibition at Alfred Stieglitz’s An American Place.

When Eliot turned to color in the 1940s, he mastered the complex medium of the dye-transfer process, which offered him the freedom of creative expression, artistic control, and permanence.  While color is now integral to the photographic world, it was not accepted artistically until the 1970’s. It was criticized for being too literal and limiting in its potential to be as emotional as a gelatin silver print. Regardless, Porter worked consistently advancing color photography as an art. His commitment to color was furthered and supported by his relationships with his brother, Fairfield Porter, and his wife, Aline Kilham Porter, both artists.  Porter’s ongoing efforts in color have earned him recognition as the Father of Color Photography.