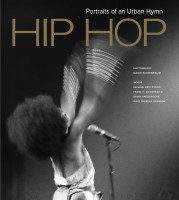 Since its inception in the 1970s, hip hop music and the culture surrounding it has become a hugely influential and popular musical form in America and around the world.  Its popularity extends beyond the urban centers where it was born, and pervades and influences youth culture around the globe.  However, few artists have created serious and powerful photographs that explore the breadth of the phenomenon.  With this volume, David Scheinbaum has done just that.  His portraits of Erykah Badu, Chuck D., George Clinton, Common, Mos Def, Del-Tha Funkee Homosapien, Sage Francis, Professor Griff, KRS One, Mike Relm, Tajai, Wu-Tang Clan and Yelawolf (among others) approach hip hop as a positive cultural influence akin to the youth movement of the 1960s.  Scheinbaum’s photographs are accompanied by essays by Gaye Theresa Johnson and Michael Eric Dyson, an artist conversation with Frank H. Goodyear III and an introduction by Brian Hardgroove of Public Enemy.