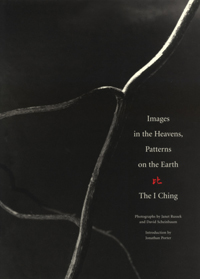 Images in the Heavens, Patterns on the Earth: The I Ching

-Richard Wilhelm
The I Ching translation

It is universal, speaking to all of humanity, yet at the same time, it is highly individualized as it is directed towards the one person who is consulting it. It is a personal questioning with a universal answer. Although its knowledge is directed towards the one individual consulting it, it is not for the individual alone. It is holistic. It’s basis is the interconnectedness of nature and man. Everything is connected to the earth and mankind as each one influences the other.

The I Ching consists of 64 Hexagrams (consisting of 6 broken or unbroken lines), made by combining 2 trigrams (three broken or unbroken lines). Each Hexagram denotes an idea, for instance, the first hexagram Ch’ien – the Creative – Heaven, is a double trigram of Heaven – 3 unbroken lines repeated. The 2nd Hexagram, K’un – The Recpetive – Earth, is also a double trigram of Earth, 3 broken lines. There are 8 double hexagrams in the I Ching, while the other 56 hexagrams are a combination of Heaven, Earth, Thunder, Water, Mountain, Wind/Wood, Fire, and Lake. Thus it is a book that speaks in metaphors, using these very visual images to create ideas from the natural world that then interpret our day to day existence. These very visual concepts appealed to Janet Russek and David Scheinbaum, as they explored and learned the workings of the I Ching.

Both Scheinbaum & Russek, photographers, began to make images that were personal interpretations of the 64 hexagrams or commentaries in the I Ching. The images are not literal interpretations – not a photograph of a lake, or a mountain, etc., but rather, they are interpretations based on the understanding of the images and the emotional response to the Hexagram using the natural world as interpreter.

Images in the Heavens, Patterns on the Earth, the I Ching, Published by Museum of New Mexico.